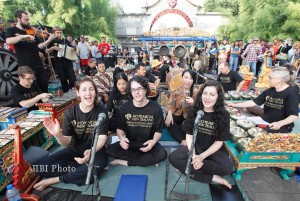 Gamelan music is found predominantly on the islands of Java and Bali. The music is played with a group of percussion instruments, including hanging gongs and xylophone style instruments, which are made of bronze and wood. Gamelan ensembles are lead by drummers (one in Javanese ensembles, two in Balinese ensembles) who play double-headed drums and give rhythmic signals to the other performers regarding tempo and dynamic changes.

Each set of gamelan instruments are tuned slightly differently from each other as there is no standard reference point (such as A440) in gamelan music. None of the tunings match a western diatonic scale. In a complete set of Javanese gamelan, there are two tuning systems called pelog (7 notes) and slendro (5 notes). In Balinese gamelan, pelog tuning predominates with ensembles such as Gong Kebyar using a 5 note pelog system and Semar Pegulingan using 7 notes. Balinese Gender Wayang ensembles, played in shadow puppetry, use a 5 note slendro scale. In West Java another ensemble called gamelan degung (also known as Sundanese gamelan) has its own 5 note pelog tuning system.

Originating from the courtly cities of Surakarta (Solo) and Yogyakarta, Javanese gamelan has been promoted internationally since the 1960s and today it is played in many ensembles associated with university music departments around the world. Described in Javanese literature as “flowing water” or “blossoming flowers”, the Indonesian and international gamelan scene includes both traditional and contemporary music.